The one thing that strikes the first time visitor in Albania is the number of MercedesBenz cars on the road, some of them brand new. When you ask about it the most common answer is: the Albanian diaspora. The Albanians who escaped from the country before 1990 prospered in large enough numbers in European nations such as Italy, which they reached with any floating device they could put out to sea for the short crossing of the Adriatic when they could not be stopped in the 1989 chaos. Others say that when Albanians came back, they brought Mercedes because the roads were in such bad conditions that only sturdy, well-built automobiles would do.

The roads are still dilapidated, but something is being done to accommodate the buses that carry increasing crowds of tourists. The other thing that hit me was how well Albanians spoke Italian. The simple reason for this phenomenon is that for many years, Albanians could receive and watch only Italian television programs across the narrow Adriatic channel. Now, there is a public television network, two national privately owned channels and scores of private stations.

Albania, a state that once was a prison to three million people until 1990, is now a fast-growing democratic nation of Europe. During World War II it, was occupied first by the Italians and then by the Germans. At the end of the war, it became a Stalinist state under Enver Hoxha, who ruled with an iron fist over the isolated, downtrodden country from 1944 until his death in 1985. The 1992 elections ended 47 years of Communist rule, but it took more time to stabilize the governance of the country.

Since September 2013, it has been ruled by the Socialist Party under the leadership of Edi Rama,  who has promised to revive the economy, eliminate corruption and speed Albania’s integration in the European Union. In 2009, Albania joined NATO and applied for membership in the union. Last July, the European Union announced that negotiations would start in June 2019 on the admission of Albania and its neighbor country Macedonia. They will be tough negotiations, as some EU member countries have expressed concerns over corruption and the rule of law. As it stands, the admission of Albania is a work in progress, pending the enactment of reforms. Albanians, however, are in an expectant positive mood, confident that they will become European citizens. In my talks in Albania, I found widespread support and general optimism.

Albania is worthy of a trip of discovery for Americans who are looked upon with affection for having supported Albanian independence steadfastly starting in 1912, and after the long, cruel isolation all the way up to the NATO intervention in 1999 that halted the ethnic cleansing of Kosovo Albanians by the Serbian forces. In Fushë Krujë, a small town near Durres, one can see the shirt-sleeved statue of George W. Bush, the first American president to visit Albania in June 2007. This is also the place where George Skanderbeg fought an important battle in his 25-year rebellion against the Ottoman Empire.

To get a sense of the temper of Albanian character, the place to visit is the small mountainside town of Kruja, 20 miles north of the capital Tirana. Since the third century B.C., it was the cradle of the Alban tribe as well of Skanderberg, who made it a bastion of his Christian resistance against the Ottomans whose forces, for the historical record, included many local ethnic groups. To be sure, it was a civil war that started in 1445 and involved the Venetians, who controlled the north, the kingdom of Naples, and a large number of chieftains from the region.

Kruja has many spectacular sites in a natural setting of extraordinary historical value. The castle, built in the 5th century A.D., straddles the top of Mount Kruje. The watchtower inside its wall offers a stunning view and encompasses the Dollma Shiren, a place for spiritual retreat in the byzantine style, the Skanderberg National Museum, and the Ethnographic Museum in what was the home of the Toptani family, the noble rulers of the 18th century.

The advent of democracy has brought money and restoration galore in Albania. Work in Kruje has brought back to life the hammam, the baths of the castle, a key vestige of the local community. Kruje lives and breaths the heritage left by the national hero Skanderberg, whose artifacts and writing have left an indelible mark on the lives of the immensely proud Albanians. The echo of the glorious past makes it hard for a visitor to find an explanation for decades of dire submission to the Communist yoke that made Albania the poorest of European countries, where people lived a grim existence under the centralized obsessive control of the Hoxha regime.

One shocking answer can be found in Tirana in the House of Leaves, where the national intelligence service had its headquarters. It certainly deserves the moniker of House of Spies as it started with being the central office of the German Gestapo in World War II and after that was the seat of the security investigations of the Communist state. In fact, it was the equivalent of the East German Stasi. Room after room contained torture and interrogation chambers, documents and reports about each and every citizen of Communist Albania, arrays of telephones and surveillance gadgets, fielded by a spying apparatus that weighed like a specter upon an oppressed population. The House of Leaves opened as the newest Albanian museum in 2017; it makes for a depressing visit but it is a testament of the courage of Albanians in not burying their past.

Another impressive site of restoration is the ancient Rozafa Fortress up above Shkodra, one of the oldest towns in Europe at the center of the Gheg cultural region. The castle sits on a craggy hill next to the confluence of the Drin and Buna rivers. The view is spectacular as it encompasses the silver stream of the rivers, the dark woods, the emerald green of expansive meadows and the brown tiled villages below. The castle itself was an Illyrian stronghold 2,500 years ago. The Romans took the fortress to dominate the region. They were followed by the Venetians until the castle was sacked by the Ottomans in 1478. Many legends surround the construction of the fortress, one of them celebrating the sacrifice of a woman, named Rozafa, who was entombed in the walls, in a pact with the devil, to keep the castle standing.

Inevitably, the visitor to Albania will come away confused by the intricate layers of history that crisscross the country. The arrival of the Romans in the second century B.C. brought the destruction of Antipatrea, a fortified city that after the fall of the Roman empire was invaded by Slavic and barbarian tribes. Julius Caesar and Pompey fought it out inconclusively in Dyrrhachium in 48 BC. In the 13th century Antipatrea fell to the despotism of Epirus and in 1201 to the Sicilian forces under the Hugh of Sully. Then came the Ottomans in 1450 who had to deal with a restless Greek population in northern Epirus. During the Balkan Wars of 1912, Greece even annexed that territory. It was a battleground of different ethnic groups such as the Chams, whose cultural identity is a mix of Albanian and Greek influences.

The friction that accompanies many unresolved nationality issues continues to this day. The visitor can grasp the complex intriguing texture of the Albanian identity just by visiting one of the many bazaars that still survive, starting with the Old Bazaar of Kruja that started 400 years ago. It was recently restored in the Ottoman style and is a treasure trove of traditional wares, from delicate embroideries to copper pots and plates. Some antiques are a good buy, but the buyer must beware. Albanian economic, social and political development has brought this ragged country within the fold of Western Europe. Finally, it is a fierce but peaceful nation, diverse and independent, certainly worthy of an attentive look 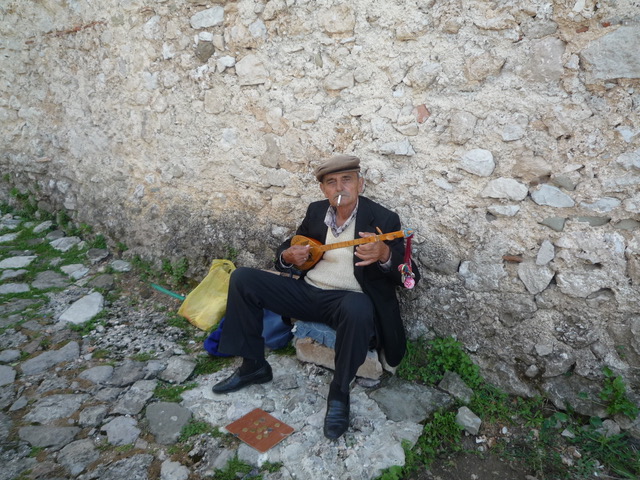