In Benin, a small country squeezed in between the narrow Togo and the powerful Nigeria, voodoo reigns supreme. In January, its population honors the voodoo practice with a national celebration in Ouidah that gathers in this place ten of thousands of adepts and the “fetish priests”. Centuries ago, Portuguese had landed in what came to be known as the Gold Coast, sadly inscribed in history as the embarkation point for those wretched masses of slaves who were sold across the Atlantic. Although Christianity came to this land with the Portuguese, indigenous belief systems such as animism and voodoo are still rooted in Benin’s culture. Most Beninese believe in a supreme god, known as Mahuy among the Fon, the largest single ethnic group. They also strongly believe in life after death and worship the ancestors who protect them against misfortune. Most of all, they worship the supreme god through traditional divinities and maintain fetishes in their homes to which they pray and offer sacrifices. Even though they have adopted Christianity or Islam, they continue to practice fetish worship. What is most remarkable is that forms of Christianity have integrated African practices and that there is little religious conflict between groups. Forty three per cent of Benin’s population is Christian, mostly Catholic, and 24 per cent, particularly in the north, are followers of Islam.

The voodoo festival in Ouidah is an event to behold and I was privileged to see both the festival and the ceremonies at the beach memorial that remind all people in Benin and elsewhere of the crime against humanity that was committed by those who practiced slavery on a grand scale. Africans themselves were the force behind it, well before Ouidah was conquered by the Dahomey army during the 18th century to become one of the main slave ports. Ouidah was a densely populated prosperous kingdom that rose to prominence as an exporter of slaves in the late 17th century. It flourished for sixty years before falling to the inland kingdom of Dahomey in 1727. At the beginning, people of the coastal region supported themselves with fishing, agriculture and hunting. The competition for trade by the Dutch, Portuguese, French and English reoriented the local population to the sea and slave trading. In 1671 the French moved their trading base to Ouidah and the English and Portuguese followed. In its heyday, the first two decades of the 18th century, Ouidah controlled the export of between fifteen and twenty thousand slaves a year.

Following Dahomey’s wars of conquest, Ouidah became the principal port and commercial capital of the kingdom and continued to be the center of the Atlantic slave trade. The kingdom’s economy was based almost exclusively on the slave trade. A permanent state of war made it possible for the Dahomey kings to capture thousand of prisoners who were sold as slaves. The abolition of the Brazilian slave trade in 1851 was the death knell of slave trafficking. The British contributed to its end by imposing a naval blockade in 1852. Two years later, the French took over the kingdom of Dahomey. It became a protectorate and in 1904 a colony, French Dahomey. The Republic of Dahomey gained independence in 1960 and finally became Benin in 1975. Today French is the unifying language in a nation where sixty indigenous languages are spoken. Although the government tried in the 1970ies to replace the French based educational system in favor of written local language, the country retained the French model. The Portuguese too left a strong mark in the region to the point of creating a Afro-Portuguese architecture. The Portuguese fort is now a museum on the history of Ouidah and the slave trade. The Catholic cathedral is a stone throw from the Temple of Pythons, where various ceremonies are held during the Voodoo Festival, centered on the magic that summons the good spirit from ancestors. The first thing that meets the eye is a big wooden human like statue with naked breast bearing a big python from the shoulder down. A round construction holds dozens of slithering snakes that are a tribute to the Fon serpent deity Dan, a divinity that mediates between the spirits and the living. A big dead tree with a hollow space in the lower trunk, where ceremonial fires are lit, dominates the scene.

The rhythm of the drums is everywhere in an atmosphere that is timeless. The compound where the temple is located is invaded by a mass of people dressed in the traditional flowing togas in the striking vivid colors of the kente fabric. The voodoo priests come from all over the region and attract frantic attention by a swarm of photographers and filmmakers. The chief advances with slow step, unperturbed, in his red cylinder hat and dark sunglasses, wrapped in an abundant toga with tribal design. He is surrounded by women in large white togas and blue head covers studded with cowry shells (in olden times cowry was used as currency in Africa). A tall man in a makeshift military uniform, carrying a wooden gun, escorts the ceremonial party. Another man, the curator of the temple, holds a python in his hands as a sign of good fortune to those crossing its path. I, too, was later invited to hold two pythons, one around my neck and one in my hands. For doing that harmlessly, I considered myself lucky and perhaps, blessed.

It is a short distance from the Temple of Pythons to the beach, where the real voodoo party is about to start. The vast esplanade in the beach lies at the foot of the monument to those who were victims of slavery, portrayed at the top as two advancing columns of chained men. Two hieratic sculptures at the base portray stylized suffering figures with their arms stretched high to the sky. It is a powerful representation of slavery in an aesthetical tribal composition. The beach is flanked by opposite rows of large tents where voodoo priests, chiefs, dignitaries and tourists are seated. They watch dancers performing on a platform in the middle and the local prefect giving a long tedious speech of remembrance in French. Chicken are slaughtered in impromptu ceremonies here and there, teams of drummers beat their tempo in paroxysmal fashion, women flail their limbs in a crescendo. The crowds sway, laugh, lift their arms in keeping up with the reverberating rhythm under the tents. Voodoo priests wearing colorful hats and multicolored togas mingle with the crowds. Respectful people, mostly women festooned with long cowry shell necklaces, follow them around.

Performance of music and dance are central in the lives of the Beninese people. The joy in the faces of those who celebrate the National Voodoo Day does not betray the fact that Benin is one of the poorest countries in the world, with a life expectancy of 59 years. Yet, the Beninese is a proud people who is eager to share its sense of spiritual life, imbued with rules and traditions that are not binding or exclusive. In fact, the people seem eager to share their world of voodoo with the visitor. Buying a fetish in the market, I felt, was a pity way to show understanding for the heritage of the people of Benin. I left with a mixed sense of satisfaction for having witnessed closely the way that spirits are venerated in their society and guilt for not having done more to understand their world. In the north, the Taneka people believe that life is a rite of passage and that in order to become a man, one has to combine time, patience and a lot of blood from sacrificed animals. The fetishes are just the gateway to the voodoo world but what really counts for the Belinese is following such practices on a continuous path. Their reason for being is following such path. At least, I did try to understand that. 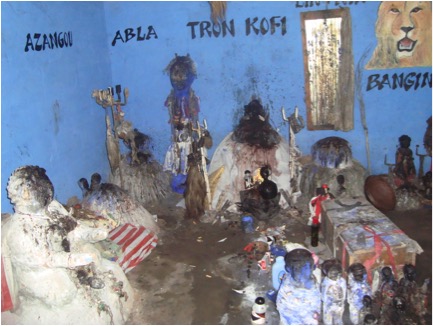 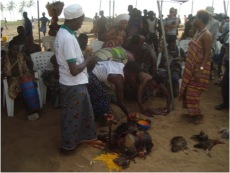 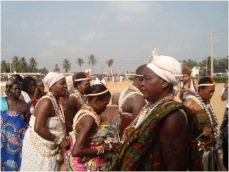 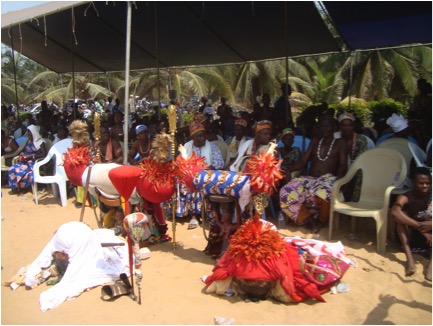 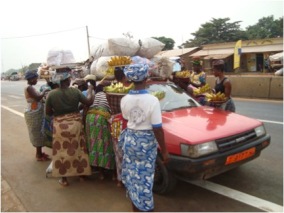