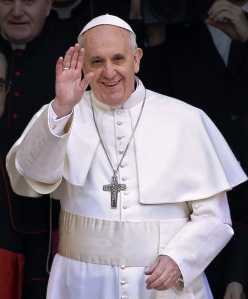 For many, it is beyond established belief and irrational expectation that a Roman
Catholic pontiff could say something like this: “If I speak of house, land and work, for some the pope is a Communist.”

Speaking to the representatives of peoples’ movements, campesinos, homeless vagrants, cartoneros(pickers of discarded cardboard) and favela dwellers, an unprecedented and striking gathering of poor people, in Vatican City of all places, Pope Francis did not hesitate to pronounce a word that nobody would expect to hear from a pontiff: struggle.

“Continue your struggle — he said. “It helps everybody.”

But he added a warning: the system must be changed “with courage but also with intelligence, with tenacity but without fanaticism, with passion but without violence.”

These are words that we heard once before from Mahatma Gandhi, Martin Luther King Jr. and a few other people who brought change by the sheer power of their work for the poor and underprivileged.

Speaking in Spanish, his native language, Pope Francis said things that no other pope had ever uttered: “You have your feet in the mud and your hands in the flesh, you smell slum and fighting people, you are a torrent of moral energy.” And finally: “Let the wind of promise, that revives the hope for a better world, transform itself into a hurricane. This is my desire.”

Many people have applauded a message that expands the so-called “Social Catholicism”
in an advanced fashion that seems to line up Pope Francis with the anti-global movement,
part of the now established stand against capitalism. What the pontiff misses no chances to repeat is that love for the poor is the foundation of the Gospel and that it is not “ideology” to speak for the poor and dispossessed.

Communism, socialism and other political theories have nothing to do with the paramount mission of the church, as Pope Francis sees it, to compassionately minister to Catholic families. But the political implications are unavoidable for the simple reason that the reformist action of Pope Francis tends to downgrade the hot button social issues that had become the main focus of an influential part of the church’s leadership, particularly in the United States.

The battles against abortion and the acceptance of gay relationships have taken far too many resources of the church. In addition, important bodies of thought and guidance in the American church have stated that abortion and related issues had greater moral weight than immigration and poverty. Something had to give, as the latter issues are at the core of Francis’ pontificate.

The ax did not wait to fall. Cardinal Raymond Burke, the leading critic of the pope’s reform, was dismissed as head of the Holy See’s highest court. He was guilty of comparing the church under Francis to “a ship without rudder.” He had gone on to say that “the pope is not free to change the church’s teachings with regard to the immorality of homosexual acts or the insolubility of marriage.” It is a statement that many have judged to be off base since the principal custodian of the Catholic Church’s doctrine is none other than the pontiff.

It appears, however, that the Catholic Church is in the throes of an evolution that is not painless or without consequences in the universe of the faithful. Pope Francis did not use the word “struggle” without cause. He did not wait long to respond to the conservative American cardinal by condemning what he called “the temptation of hostile stiffening,” stressing that such temptation is that “of the zealous, the scrupulous, and those who are known today as traditionalists and the intellectualists as well.”

In sum, the accusation that is leveled at Pope Francis is that of giving voice to a “popular movement” that accepts the prevailing culture, instead of “converting” it. For his part, Pope Francis is cleaning house in the United States, appointing moderate bishops. Indeed, the rift between conservatives and progressives is destined to grow but on a general level it will not damage the “Bergoglio effect,” which is the strong popularity of Pope Francis among Catholics and significantly enough, among non-Catholics in the world.

It has been said that conservative Catholics are confused, and many are unhappy, because they were used to a pope who was prudent and predictable. Pope Francis is neither. Those who know him best have quoted from his speech in a plenary assembly of the cardinals before the conclave, when Cardinal Bergoglio spoke about the duty of “evangelization.” “Evangelization – he said – means that the church goes out of itself and toward the periphery of the world, not only the geographic one but the existential. If the church remains closed in itself and becomes self-referential, it gets sick.” This — he concluded — is “theological narcissism.”

That speech –- we now know — convinced many cardinals to make him pontiff. Since then, a few have called Francis “the poor bishop.” But he is a bishop who does not tolerate worldly goods and immoral behavior in the church. Unlike his predecessor, who suffered but did not act, this pope acts. Let us just hope that he will live long enough to reach the “periphery.”